What you need to know about Smart Contracts

What Is a Smart Contract? 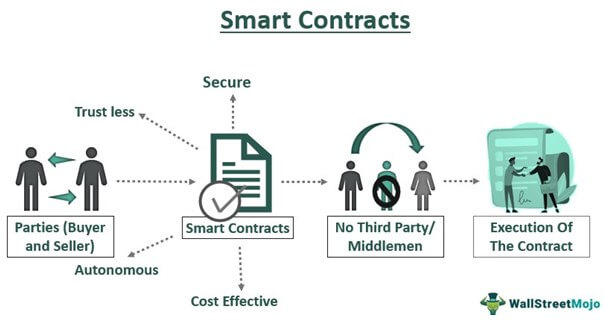 A smart contract is a self-executing contract with the terms of the agreement between buyer and seller being directly written into lines of code. The code and the agreements contained therein exist across a distributed decentralized blockchain network. The code controls the execution, and transactions are trackable and irreversible.

Smart contracts permit trusted transactions and agreements to be carried out among disparate, anonymous parties without the need for a central authority, legal system, or external enforcement mechanism.

While blockchain technology has come to be thought of primarily as the foundation for bitcoin​, it has evolved far beyond underpinning the virtual currency.

WHAT YOU NEED TO KNOW

Smart contracts were first proposed in 1994 by Nick Szabo, an American computer scientist who invented a virtual currency called “Bit Gold” in 1998, fully 10 years before the invention of bitcoin. In fact, Szabo is often rumored to be the real Satoshi Nakamoto, the anonymous inventor of bitcoin, which he has denied.

Szabo defined smart contracts as computerized transaction protocols that execute terms of a contract. He wanted to extend the functionality of electronic transaction methods, such as POS (point of sale), to the digital realm.

In his paper, Szabo also proposed the execution of a contract for synthetic assets, such as derivatives and bonds. Szabo wrote: “These new securities are formed by combining securities (such as bonds) and derivatives (options and futures) in a wide variety of ways. Very complex term structures for payments can now be built into standardized contracts and traded with low transaction costs, due to computerized analysis of these complex term structures.”

In simple words, he was referring to the sale and purchase of derivatives with complex terms.

Does smart contracts has anything to do with to with tokenomics?

It depends on the use case of your token and the Blockchain you used to deploy your token. If it has anything to do with smart contract, then you will need it